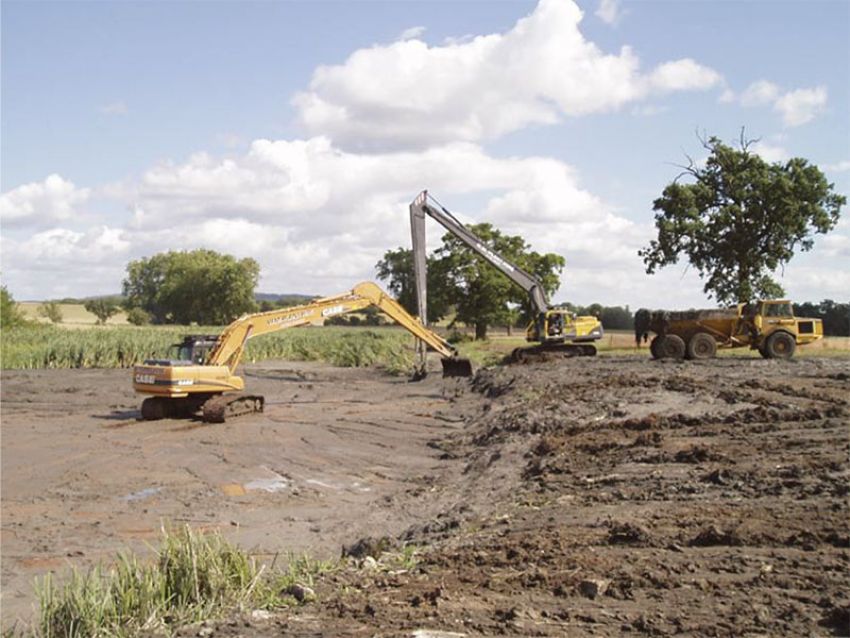 Owned by the National Trust, this park was Capability Brown’s first landscape project that inspired the English country garden style throughout Europe. Brown created a lake and the mile and a half long artificial River Croome, a smaller version of the local River Severn some 250 years ago.

Restoration of the park included the dredging of 25,000m3 of silt from the artificial Croome River to be spread on adjacent land. Management of historical and archaeological issues was most important in returning the river to its original condition. Records identified stone walling, veteran trees and buried structures that needed to be located and preserved along the watercourse. At its widest point the river was over 50 metres across.

Working closely with the Client, WM Plant Hire proposed a methodology to minimise any disturbance to the existing environment and record any significant finds during the works. Using long reach excavators with low ground pressure tracks silt was moved from the bottom of the river into a series of dumptrucks. Environment Agency consents were obtained to spread the material and level it on the adjacent land. An 18m long reach machine was used to clear the silt from the bank edges, working along the river bed. It was fitted with a hydraulic tilting bucket mechanism to enable the correct profile to be achieved. This allowed the heavier excavator with a 22m reach to sit well back from the bank edges load silt into the dumptrucks. A GPS survey provided co-ordinates of the historical features located. The works were completed ahead of schedule to the satisfaction of the National Trust.