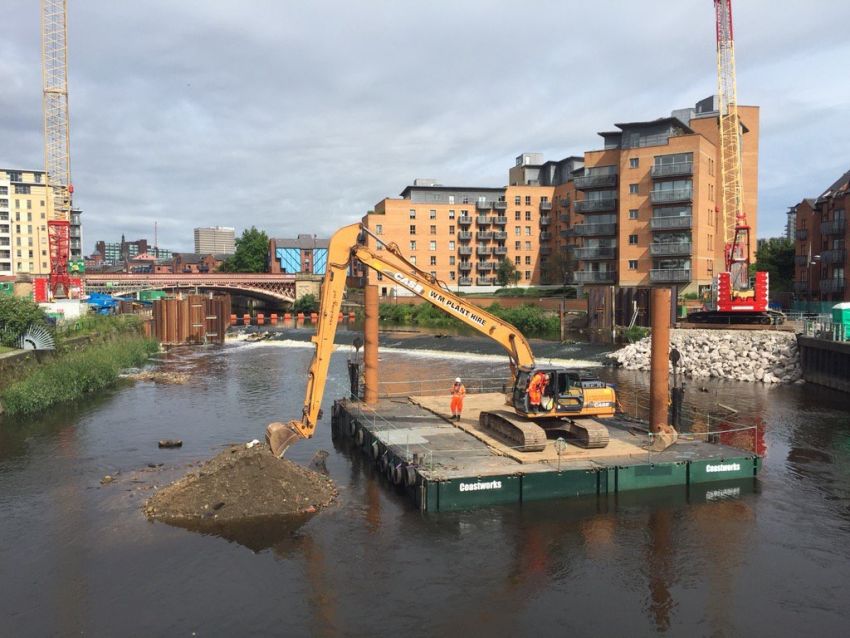 BAM Nuttall selected WM Plant HIre for their specialist long reach equipment back in 2015 to assist with the phase of works at Knostropp. Our machines were involved with the construction of the new weir, including temporary works such as piling and placing of rock armour. Following the removal of the exisiting weir and section of the island at Knostrop Cut that separates the river and canal, there was a requirement to reprofile the new watercourse to create a navigable channel with greater water holding capacity. Given considerable access constraints mounting long reach machines on pontoons was the preferred option.

In April an additional machine weighing around 30 tonnes was mobilised to dredge the main river channel. Fitted with GPS dig profiling equipment this ensured accuracy of excavation. However, with recent surveys showing additional material had washed down during winter flooding our 60 tonne CAT long reach machine with 20m reach was then selected to increase production rates on the dredging works. Working from a larger pontoon the long reach was able to load hopper barges which were then moved by powerful river tugs to an existing wharf structure to be offloaded by dump trucks and taken to nearby tip.